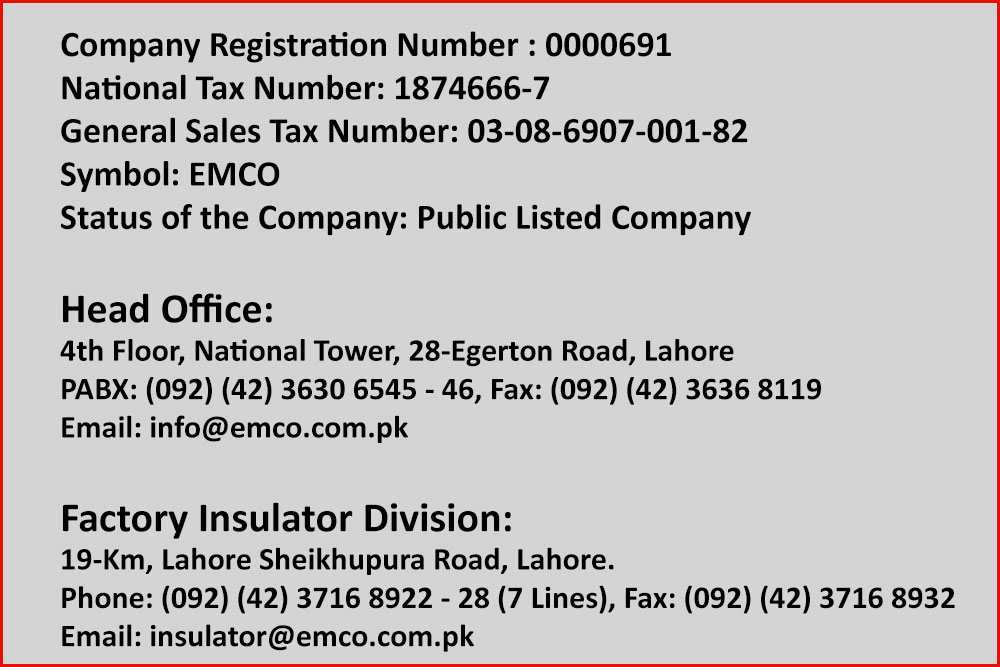 In 1951, a very modest beginning was made by setting up a small facility located in the basement of the offices of The Imperial Electric Company (Pvt.) Ltd., for the production of electrical accessories. With single minded initiative and efforts of Late Mr. Ata-ur-Rehman (the former Managing Director), the facilities were continuously upgraded and a full-fledged facility was established in Lahore, Pakistan by 1954 under the same name of Electrical Equipment Manufacturing Co. Ltd. (EMCO). The first comprehensive Insulator Manufacturing Plant was in operation with the active participation, know-how and machinery coming from Japan and France.

Keeping pace with the ever increasing and diversified demand of Insulators for national utilities and electrical industries in Pakistan, it was decided in 1965 to expand the facilities to produce all types of insulators including those required for extra high tension lines.

"To become the company of first choice through innovation, commitment to quality, economy, reliability and by meeting the expectations of our stakeholders."

"Emco, the pioneer of ceramics in pakistan, is committed to producing high quality ceramic products, which include, high tension porcelain insulators, at emco we fairmly believe in full satisfaction of our customers, employees and all other stake holders.

Quality is very dear to us. Hence, we train our employees constantly to improve the quality of our products. We consider raw material suppliers as our partners and prefer to use indigenous raw materials for the benefit of the pepole. We carry out research & development which helps not only in producing new2 products but also assists in finding innovative ways of production.

Our aim is to excell through continuous immrpement, diversification and innovation."

This will be achieved by Maintaining Sustainable Growth Fulfillment of Corporate Social Obligations. Continuous Improvement of Process focused on:

Total Quality Management. Innovation and characterization. Technical Skill and Advancement Cost Effectiveness. Creating a Culture which: Creates a sense of ownership amongst employees. Encourages team effort. Recognizes and values the individual’s contribution. Gives the individual an opportunity to enjoy and excel in his work. Encourages the individuals to put his best to achieve the shared vision. Every employee has the responsibility to build quality into the product.

The Quality Assurance System operating within EMCO Industries Ltd. is based on the requirements of ISO 9001:2008; and is mandatory for every employee.

Detail of Associated Companies can be found here.